The Evolution of Car Ads

Working in the ad printing industry for over 80 years has given us the opportunity to work with some incredible brands and see some amazing ads. The automobile industry, in particular, has always had a creative and innovative advertising culture. After partnering with companies like Ford, Renault, Toyota, and Nissan, it has been exciting to watch the evolution of each company’s advertising campaigns over time, as well as see certain brand elements that have remained consistent over years. Here are a few of our favorites, including some featured vintage ads we printed for our clients:

You can’t get any more vintage than the Model T when it comes to car advertising. Ford, and the automobile industry, has certainly come a long way since the launch of this beauty in 1908.  But these are some of the ads that started it all. Introducing the revolutionary “touring car”, priced at a stunning $850 (roughly $21,400 today), this first ad appeared in Life Magazine in 1908. Even back then, Ford was already taking the “high-priced quality in a low-priced car” stance, targeting it to the middle-class American.

By 1924, the “car for the young businessman” was changing the world. Speaking the optimistic and capitalist language of the 1920’s, the ad promoted the Ford as “a profitable partner and a happy companion for the boy who is making his mark in business and at school.” Larger images and less text became a much more important part of advertising as well.

Then, we get to 1958. The glamorous profession of the pilot taken hold in American culture and Ford capitalized on it. The Thunderbird, like the man of every woman’s dreams, hot and handsome.

Then, in 1983, Ford launched this one-word ad. “Daring.” That’s all you need to know about the Thunderbird. Similar to the 1958 ad, it speak to the “young and restless” generation of Americans, quite a different youth culture than the “young business man” of 1924.

More recently, Ford presented this ad for the Explorer and their “Go Do” campaign. Similar to the one-liners above, this ad uses a big central image to communicate its message and a short tag line to drive it home. The image of a man and a woman about to go kayaking communicates an adventuresome, “grab life by the horns” persona that is evident in the 1983 ad.

Weep no more, ladies! Now there’s a big car even you can drive. This 1940 Buick ad featuring the Buick LIMITED, presents a car designed to be big but not bulky, so women can drive it. Here’s the Buick, “…swinging wide its doors on interiors big enough to hold a tea party in. Now that’s a big car – but you’d never know it at the wheel.”  The carefree and classy lady behind the wheel is designed to reach their new target market, women driving to work while their men are at war. 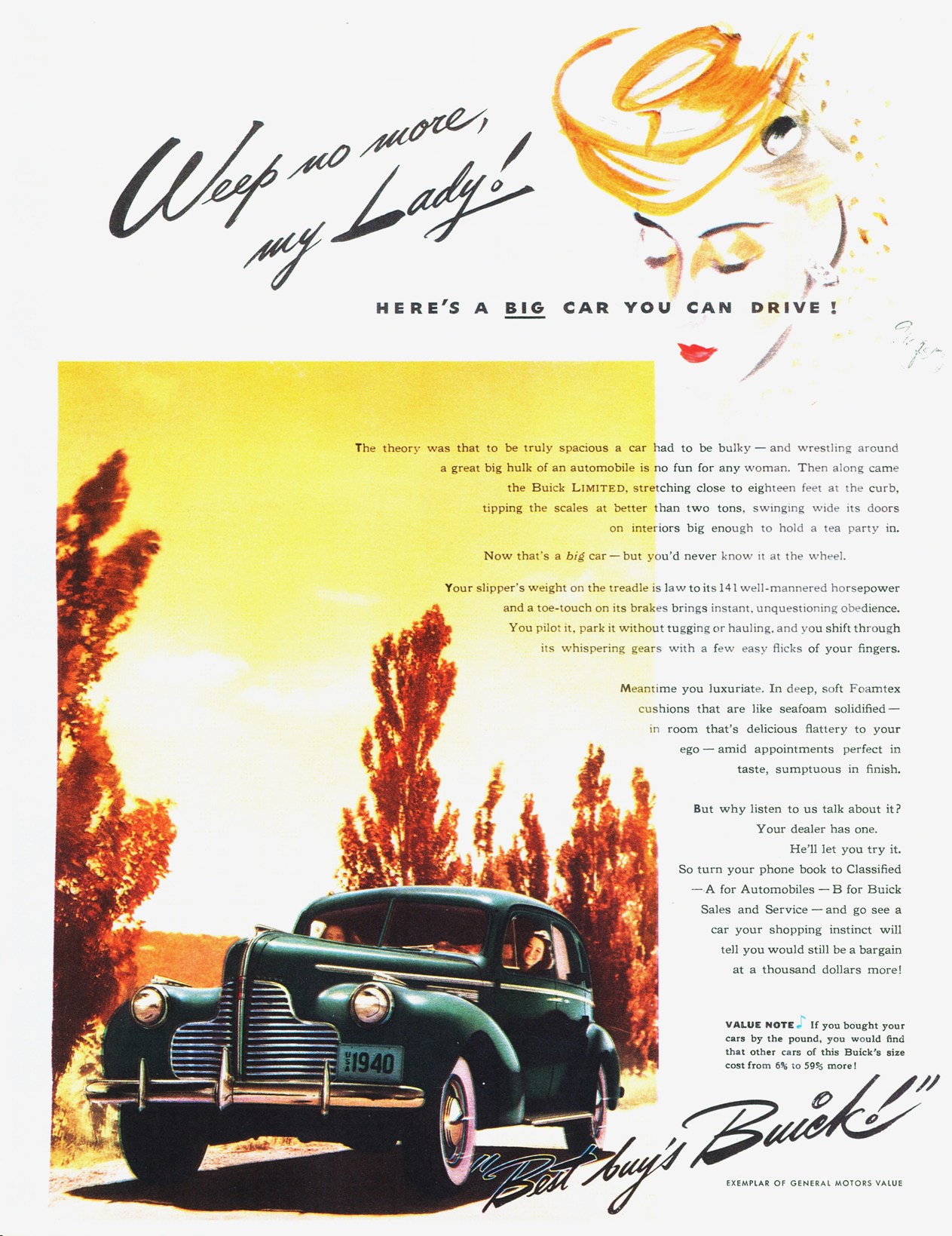 Then in the 1980’s, Buick came out with another woman-targeted. “Good looking outside. Good thinking inside.” Just like the Ford-Pilot ad, the clever line could be talking either about the car or the woman. Either way, it reaches a market of classy, smart, and hard-working women on their way to work, smiling while preparing for that big presentation.

In 2011, we see a cleaner and sleeker look for the Buick Regal, but this time, it’s not the driver that’s classy, but the car. Buick began moving away from their “practical” brand to a new “sleek and luxurious” tone, but still on the move. The same wit and cleverness come through in the copy, but with a new direction and a new market.

Toyota was founded in Japan in 1937 but didn’t break into the United States market until 1957. This Corona ad came out in 1967 after the 2000GT Open-Top made its screen appearance in You Only Live Twice. This ad spoke perfectly to America’s love for James Bond and the powerful, exotic, and adventurous lifestyle he portrayed. 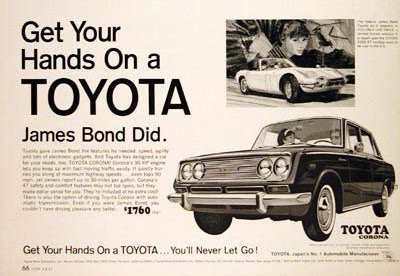 Toyota’s “More Power To You” billboard ad came out in the 1980’s. This is a  powerful car for a powerful driver to take over the road with. Another Supra ad from this time mentions its “cat-quick agility” and “electrifying performance.” While there are no direct undercover spy references, the message is still the same.

Finally, 10 years after the creation of their first hybrid car, Toyota actually launched a print ad campaign that didn’t even have a picture of the car in it. Of course, when the point of  the ad is not just to sell car, but a feeling of contributing to preserving the environment, the point is not what the car looks like,  but what the environment looks like. “We are committed to preserving the delicate balance between man and nature,” says the ad. They did an entire campaign with humans formed into landscape, communicating that the power is actually in the hands of the consumer to preserve what’s around us.

Sign up to stay current with the latest on Kubin-Nicholson.